skip to main | skip to sidebar

So we finished the project - it was great!

The report from the visit is here: www.camdenabudis.net

And we made the BOOK - available here: http://www.camdenabudis.net/shopbooklets.html

And we made a REPORT - some bits of it will go on to our YouTube channel soon.

And we gave out the book to the people involved and to schools in Abu Dis and Camden.

Here are some pictures from London of the Youth Ambassadors looking at the book ... :)

And the next CADFA youth visit is Young Film-Makers for Human Rights - coming June 2010! 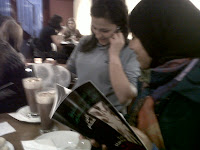 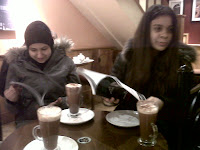 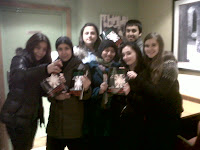 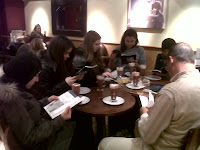 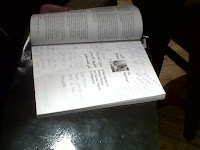 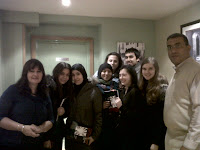 Dear all of you

In Abu Dis, it will still be on TUESDAY 29th SEPTEMBER

(2) We have a collection of photos from the youth visit here:

Nandita
Posted by zafaran at 01:16 No comments:

By Enas and Ballu J
What did we do?
Firstly, we had a meeting at the community centre in Marchmont Street. Everybody got in pairs or threes to talk about themselves. After, we had to tell the whole group about the person we talked to, for example what their favourite subject was, how old they were and who their friends were. Also, we got our brilliant t-shirts with the design made by some of the Camden and Abu Dis students. We talked with Nandita about what we were going to do later in the day and in the week. Next, we visited Camden Lock. There was a bridge and many shops and markets. We saw some boats on the canal too. Afterwards we went to Hampstead Heath. Enas liked the pond with ducks and the games we played together. Ballu liked walking up Parliament Hill.
What did I see that was new to me?
Enas: The red buses we travelled on, the cars drive on the right in England and in Palestine they drive on the left.
Ballu: I hadn’t been to Hampstead Heath and seen the ducks before.
What did I find out about Britain/Palestine?
Ballu: I didn’t know that in Palestine they drive on the left instead of the right until Enas told me.
Enas: I didn’t think it would be as warm as it was today.
Something surprising
Enas: In England it doesn’t get dark until late.
Something funny
Ballu: Anna and Saf having a waterfight with Ruhel and when everybody played truth or dare in the park.
Something sad
Enas: Nothing.
Something I liked
Enas: Hampstead Heath and Parliament Hill.
Something I didn’t like:
Ballu: Nothing.
Some new words in English or Arabic:
Ballu: قطة cat أصدقا friend (Nandita, can you write this in Arabic please)
Enas: Parliament Hill, report
Anything else you want to talk about:
We enjoyed ourselves today and it was a really nice introduction. Tomorrow is going to be very tiring, but hopefully it will be fun too.
Posted by zafaran at 07:35 1 comment:

From Adam (and note from Nandita)

[ From Nandita: It's probably best not to put your emails on the blog as it's public - We can send them to you all. But do put any messages on the blog that you are happy for everyone to read...]
Posted by zafaran at 11:59 No comments:

All safely back in Abu Dis 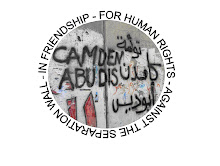 This blog is for the youth ambassadors from Abu Dis, Palestine and from Camden, London, and also for the other people involved in the Youth Ambassadors project in June 2009.

For more information on the project see
http://www.camdenabudis.net/